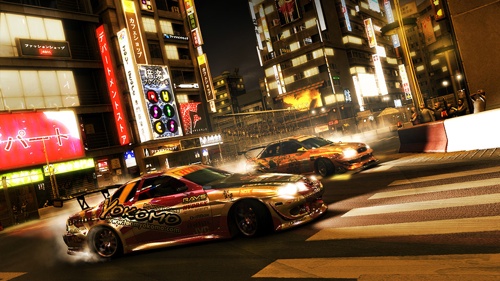 Feral Interactive says that BAFTA award-winning racing game GRID will be released for the Mac on March 28. Developed and published by Codemasters for PC and consoles, GRID is part of the celebrated TOCA Touring Car series and comes to the Mac under the Feral Legends label.

Here’s how the game is described: “Style meets substance in GRID, an exhilarating mix of sublime handling, dazzling visuals and extreme speed that puts players behind the wheel of massively race-tuned road cars by manufacturers such as Porsche, Lamborghini and Aston Martin. With a sophisticated damage model, adjustable difficulty settings and a handy ‘Flashback’ feature, GRID rides the sweet spot between sim realism and full-on arcade racing.

“GRID World is an extensive career mode that sees players race their way around the world from the US to Europe to Japan on spectacular tracks ranging from city streets to mountain roads to famous circuits such as Spa and Le Mans. Players are challenged to advance from rookie to pro and eventually lead the top racing team in the world by proving their chops in five very different driving disciplines.

“The Feral Legends version of GRID comprises the base game plus the 8-Ball and Prestige DLC packs, which soup up the Race Day and multiplayer modes with 18 extra cars, two new events and one new track. The game includes LAN and online multiplayer modes and supports a large selection of gamepads and steering wheels.”

GRID for the Mac will retail in North America for US$24.99. When released, it will be available online for direct download from a variety of digital partner sites worldwide including http://www.feralinteractive.com/ .