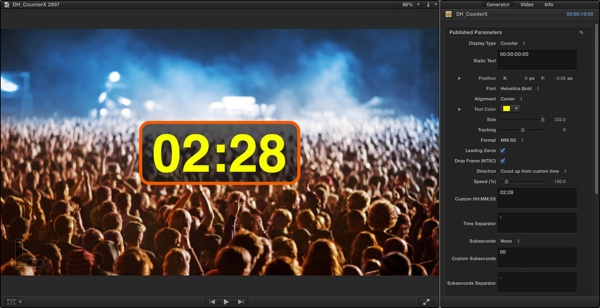 Digital Heaven has released DH_CounterX, a new FxPlug generator plug-in for Final Cut Pro X and Motion 5. It’s designed to make it easy to add an animated counting display over your footage.

DH_CounterX lets you create an animated counting display over video footage in Final Cut Pro X and Motion 5. Among other things, it can be used to create a countdown timer to the start of an event or for coverage of sporting events such as races and against-the-clock challenges.

Due to current limitations between FxPlug plug-ins and Final Cut Pro X, DH_CounterX uses a fixed list of standard fonts which are installed by default with OS X 10.6, 10.7 and 10.8. Custom installed fonts will not be usable by DH_CounterX.

DH_CounterX requires Final Cut Pro X (10.0.6 or later) or Motion 5. It costs US $29.99 and is available for purchase at www.digital-heaven.co.uk . For the first 30 hours after release, customers can get a 30% discount on the plug-in by using the coupon code shown on the Digital Heaven website. A watermarked trial version can be downloaded from the website.