Sentiment surrounding Big Data vendors remained positive last year, despite sceptics’ suggestions that the subject had been ‘over-hyped’, according to Ovum (www.ovum.com). The Big Data buzz word even managed to transcend from the enterprise IT world to become a hot topic for business publications and journals in 2012, with MongoDB claiming considerable mindshare among web developers who traditionally relied on MySQL, according to the research group.

In a research note, Ovum analyses data gathered by DataSift, which ranked Twitter mentions and sentiment of vendors (and open source organizations) associated with the Big Data market in 2012.  The global analysts were surprised to find that while Hadoop garners much of the spotlight as a Big Data platform, the vendor 10gen, which develops MongoDB, came in second in mentions to Apache, which hosts the Hadoop project.

“Given the level of build-up and suggested hype, it surprised us that sentiment expressed about Big Data vendors still remained so positive in 2012,” says Tony Baer, principal analyst for Ovum. “What’s also interesting is the degree to which Big Data became a business, not just a technology story in 2012. Some business portals, such as Forbes and Harvard Business Review, edged out popular IT news portals, in terms of coverage of this traditionally ‘techy’ subject.

While positive mentions of Big Data vendors outnumbered negative mentions by 3:1, negative sentiment spiked in November with headlines over HP’s troubled acquisition of Autonomy. Not surprisingly, given that vendors accelerated the pace of product announcements during 2012, 60% of Twitter activity occurred in the second half of the year.

The Twitter data provided a good glimpse into vendor brand recognition with Big Data. 10gen, which developers the popular MongoDB document-oriented NoSQL database, scored high in mentions, trailing only the Apache Foundation. Others such as IBM and Teradata were also well represented in the Twitter stream, trailing only behind Apache and 10gen in positive mentions. Splunk, which is associated with machine data and, like 10gen, is also popular among developers, also scored high, showing that there is growing awareness about harnessing “the Internet of things” to generate business insights.

“While Twitter streams are not a scientific focus group for detecting brand awareness, they provide a valuable window on market thinking,” says Baer. “The data showed that while some players, such as IBM and Teradata, successfully scored high recognition in Twitter mentions, other enterprise players need to better focus their message to get Big Data recognition.” 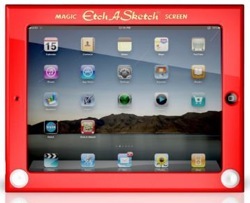 Turn your iPad into an Etch-a-Sketch