Shanghai for Final Cut comes to the Mac App Store 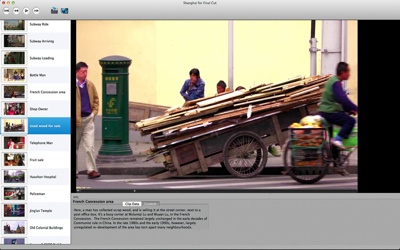 Mosa Motion Graphics has released Shanghai for Final Cut 1.0 on the Mac App Store . It requires Mac OS X 10.6 or higher and costs US$59.99.

Shanghai is a helper application that runs alongside Apple’s Final Cut Pro, and dispenses video of Shanghai, China, directly into Final Cut events or bins. It also works with iMovie, FCPX, Final Cut Express, and Keynote.

Shanghai themes include Skylines, People, Industry, Colonial Areas, Transportation, and Old Street Scenes. All clips contains picture and sound, and are royalty free. These HD clips can be dragged and dropped directly into Final Cut “events” or “bins,” or can be saved directly to any folder. Shanghai’s thumbnail based interface works as a helper application alongside Apple video editing programs.

All shots can be screened on the app’s movie player screen. Just below the movie player screen, a data panel displays shot location text information, and the video file’s attributes. If a user intends on putting the shot into an open project, the image thumbnail can simply be dragged into Final Cut Pro or iMovie. Final Cut Pro transcodes the file, and it then becomes visible in the project’s bin or event a few seconds later.

Info needed on birding/bird watching software for the Mac

TalkPlus Unlocks the Power of the iPhone