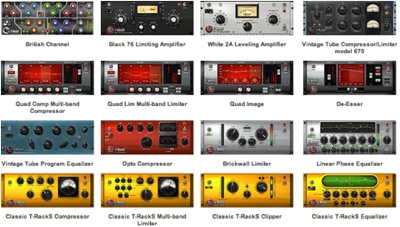 IK Multimedia has released T-RackS Custom Shop, version 4.0 of its mixing and mastering suite for the Mac and PC. The new T-RackS CS offers five new, analog-modeled and digital processors. Plus, it integrates the Custom Shop, IK’s online gear shop. It allows users to purchase gear models à la carte from within the T-RackS software itself, and much more.

The new T-RackS CS includes five new processing modules. Four belong to the new Quad Series of multi-band mastering processors, which includes a compressor, limiter, stereo imager and de-esser. These units allow for mastering and mixing by splitting the signal into four adjustable frequency bands (three for the de-esser) that can be processed individually. Each Quad module is equipped with a set of filters and a solo function for auditioning individual bands.

The fifth new processor is British Channel, an analog-modeled emulation of the channel strip from what IK Multimedia says is the most popular British mixing desk of all time. Additionally, T-RackS CS now integrates all of the CSR Classik Studio Reverb processors: Hall, Room, Plate and Inverse, which have been updated to offer 64-bit precision when running from the T-RackS shell.

The new T-RackS CS now includes the IK Custom Shop, the integrated online tool that allows users to expand T-RackS with à la carte processors, try them before they buy them, and tailor their studio to fit any level of personal budget.

T-RackS CS is also available for free in a version that includes two modules (classic EQ and metering). In addition to the free version, T-RackS CS is now available in three collections:

° Grand — includes everything in T-RackS CS Deluxe, plus seven additional processors: Quad Comp, Quad Limit, Quad Image, De-Esser, British Channel, Black 76 and White 2A. It provides the full collection of 16 T-RackS processors, featuring all the new modules released so far (not including CSR).

Through Jan. 7, 2013, a 50% off introductory upgrade price for T-RackS Grand is offered to users who’ve purchased any previous T-RackS Deluxe or Standard bundle, or single plug-in. These special upgrade prices start as low as $99.99 and go up to $149.99, depending on the version. For more information, go to www.t-racks.com .