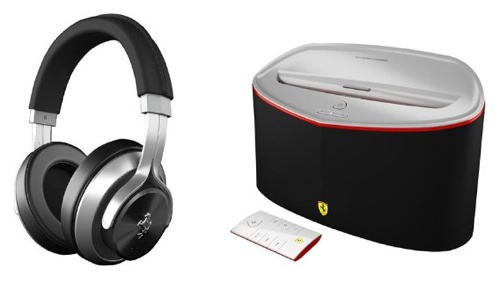 Ferrari by Logic3 has announced its expansion into the U.S. with the debut of the Cavallino T350 Headphones and Scuderia FS1 Bluetooth Speaker Dock.

The ear cups and headband are trimmed in leather and boast machined crafted metal arms. The T350 Headphones are available in black and tan, come with a carrying case and an anti-tangle, in-line remote cable for Apple, Android, Blackberry and Windows devices.

Inspired by the Scuderia Ferrari racing team and the GT car’s innovative lines, creases and curves, the Scuderia FS1 Bluetooth Speaker Dock ($549, flaunts a sleek and sophisticated design, according to Patel.  The 2.1 speaker system is powered by patented Class HD Technology integrated with a Digital Signal Processor (DSP) which controls the crossover and equalization, allowing for best performance, natural musical timbre and extended low frequency response, he adds. This flexible speaker system is Bluetooth-enabled to wirelessly play music, and the integrated 30-pin connector will charge and play Apple devices.

The T350 and FS1 are available at www.ferrari.com and select retailers nationwide. For more info go to www.ferrari-by-logic3.com .