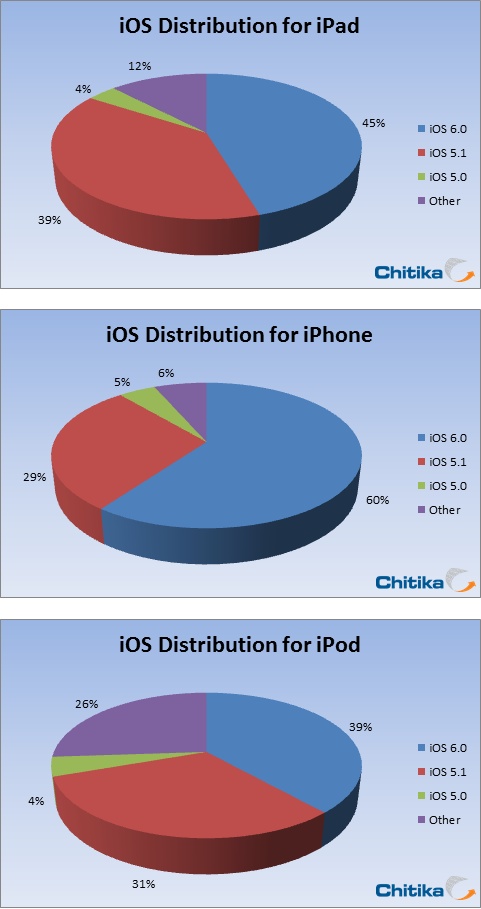 To quantify this study, Chitika Insights took a sample of millions of mobile ad impressions coming out of the Chitika Ad network ranging from Sept. 18 to Oct. 1. The growth rate of iOS 6 was then split by device and compared to total iOS Web usage to illustrate the differences in adoption by the devices.

Chitika data shows that since the release of iOS 6, iPhone users have exhibited the highest rates of adoption, with iPad users close behind and nearing the 50% marker. iPod users are the least likely to have updated to iOS 6, but still post a remarkable 39% adoption rate just 11 days following the operating system’s (OS) release.

Extracting a single day’s worth of data for each of these devices reveals similar iOS distributions for both the iPhone and iPad, but a more fragmented one for the iPod touch.

The higher degree of fragmentation seen with iPod touch devices can be largely be attributed to first and second generation iPod touches not being able to update past iOS 4, notes Chitika Insights. While the same is true of older iPhones, cellular companies offer discounted upgrades as part of contracts, encouraging turnover within this market.

Overall, Chitika says this data points to Apple doing an outstanding job of keeping their user base up-to-date with the latest OS. By comparison, Google’s latest data shows only 22% of its users being on its two most recent versions of Android.

The Mac Night Owl talks with Adobe about its ‘Quark Killer’