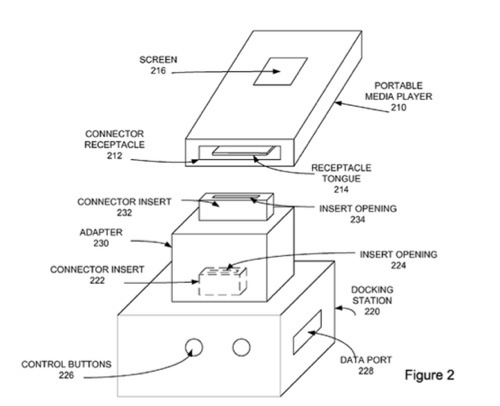 Apple has been awarded a patent (number 8280465) by the U.S. Patent & Trademark Office for a wireless adapter for interfacing between an accessory and a device. It seems to involve an adapter for the Lightning port on the iPhone 5.

Another example provides an adapter having a direct connection between pins on the connector insert and pins on the connector receptacle that are used for compatible signals. Another example provides an adapter including a DC-to-DC converter that receives a first power supply from an accessory and provides a second power supply to a portable media player. Another translates signals using different signaling technologies.

Authentication and identification circuitry may also be included. Other examples may employ wireless technologies instead of either or both the connector insert and connector receptacle.

° Patent number 8280770- for a method and apparatus for selling subscriptions to periodicals in a retail environment;

° Patent number 8289588- for a self capturing and keyed mobile device button;

° Patent number 8279948- for mechanisms for detecting tampering of an electronic device.

Article shows how to use Apple Target Disk Mode with FireWire