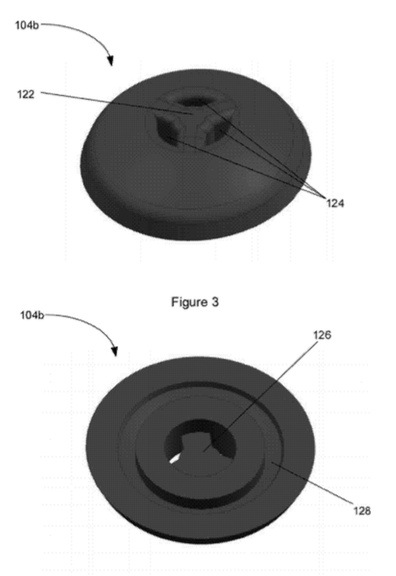 Apple has filed a patent (number 20120243153) for a “device foot” with the U.S. Patent & Trademark Office. A moveable device foot for an electronic device is described, such as that on the Magic Trackpad.

Here’s Apple’s background on the invention: “Most consumer electronic devices include a touch-based interface of some type, such as a key board, a touch screen, moveable buttons or the like. For touch-based interfaces with moveable components, a user’s experience can be affected by feedback generated during actuation of the moveable component, such as a resistance to movement, a smoothness of the movement and a range of movement.

“Typically, users find certain combinations of touch-based feedback more pleasing to the touch than other combinations. In addition, from a visual stand point, users often find compact and sleek designs more aesthetically appealing. Sleek and compact designs that are visually appealing tend to have compact enclosures that leave little room for a wide range of movement associated with touch-based interface components.”

The inventors are Erik A. Uttermann, Rico Zorkendorfer and Andrew Lauder.

° Patent number 20120246593 for a method generating section dividers that remain visible when the section to which they correspond has been scrolled off the display;

° Patent number 20120246240 for enabling a user to obtain additional information pertaining to a set of media content that is currently being presented to the user;

° Patent number 20120243748 for methods and an apparatus for concealing sensors and other components of electronic devices;