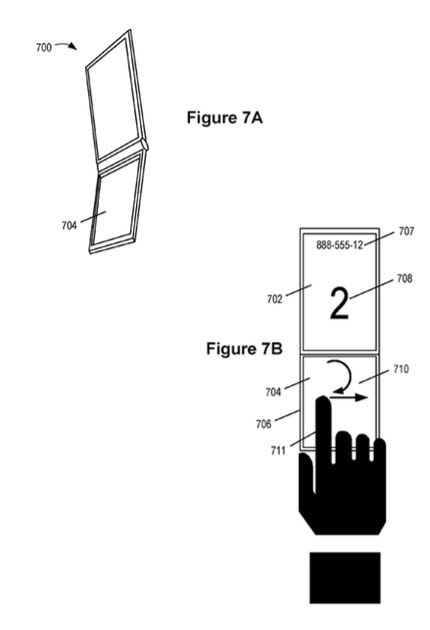 Here’s Apple’s background on the invention: “Many devices used in day-to-day life for various and divergent functions are essentially computers, or computing devices. Such devices typically include a computer processor and computer memory coupled by a bus. Such devices include, but are not limited to, Personal Digital Assistants (PDAs), telephones, media players, cameras, and Global Positioning Satellite (GPS) modules as well as laptop computers and traditional desktop computers.

“Many of the above devices are configurable. For example, a laptop may have a main body with a screen unit rotationally attached to the host device. Thus, the user may configure the screen at a desirable angle for viewing. The user may also protect the screen by ‘closing’ the laptop, i.e., by rotating the screen unit against a keyboard portion of the host device where it is latched in that position. In another example, a cellular telephone may have an upper piece and a lower piece rotationally connected by a hinge as in a conventional “clam shell” design. The two pieces may be configured so that the two pieces are together (‘closed’) or apart (‘open’).

“In many of the above devices, the mode of use results in or requires a certain configuration. For example, the laptop must typically be open to see the screen and use the keyboard. The cellular telephone typically must be open for the user to speak into microphone and have access to the telephone’s earpiece.

“Like most computers, these devices require an input tool and an output tool. Many types of input tools exist for performing operations in computers. Typical operations include moving a cursor and making selections on a display screen. Input tools may include a collection of keys or buttons, mice, trackballs, joysticks, touch pads, and touch screens.

“Visual displays have become one of the most prevalent output tools. In mobile devices the visual display is typically a display screen, such as a Liquid Crystal Display (LCD) screen, which is built into the main housing of the device or moveably (but permanently) attached to the main housing of the device. As with input devices, the display screen may be specially configured according to the purpose of the computer.

“Other input devices, however, may sometimes be preferred to touch screens, such as in cases where it is important not to block a user’s view of the touch screen with a hand or stylus when using an input device. If display elements are small, or if display elements rapidly change, a keyboard or touch pad may be more desirable than a touch screen. For example, while typing a document it is often desirable to see all the typed characters and to see changes to the characters as they are typed.

“A computing device’s mode of use may be designated by commands from the user. However, this requires the user to take proactive and time-consuming steps. Setting a configuration for interpretation or acceptance of input from any of the input devices may be complicated and difficult to understand. Additionally, the user may feel this use of time is inefficient and may decide not to designate the mode of use, or the user may also forget to designate the mode of use. Either case leaves the user in danger of unexpected input from the undesired input device.

“Thus, despite the availability of useful input tools, making the appropriate input tool available for the user remains a problem. It is therefore a goal of this invention to solve or at least reduce the problems associated with input tools on computing devices.”

Chris A. Ligtenberg is the inventor.