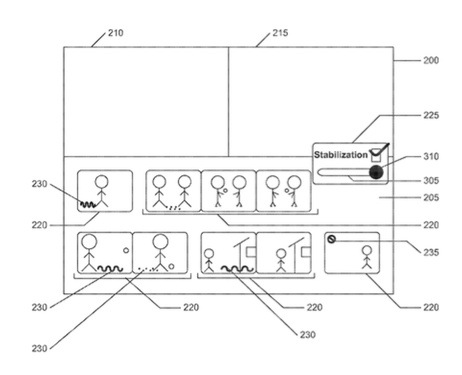 Apple has filed a patent (number 2012022970) with the U.S. Patent & Trademark Office for “zoom indication for stabilizing unstable video clips.” It involves the improved stabilization feature found on the iPhone 5 and latest iPod touch, as well as its various video editing applications.

Here’s Apple’s background on the invention: “Digital video clips can be recorded using digital video cameras. While content captured using a stabilized camera, for example, a camera on a tripod or a camera on a steady-cam rig is stable, content captured using hand-held cameras can be unstable and can appear shaky. When played back in a display device, the frames in unstable segments of the video clip appear to shake because the hand-held camera was moving during recording.

Randy Ubillos is the inventor.

° Patent number 20120233489 for circuits, methods, and apparatus that allow signals that are compliant with multiple standards to share a common connector on an electronic device.

° Patent number 20120228799 for a position-locking method for inserting and molding delicate components.

° Patent number 20120233167 for methods and arrangements for facilitating generation of media mixes for a program participant based at least in part on media library inventory information provided by a number of program participants.

° Patent number 20120233193 for a system for browsing through a music catalog using correlation metrics of a knowledge base of mediasets.

° Patent number 20120233631 for host device suspension of a communication link to a client device based on client device notification.