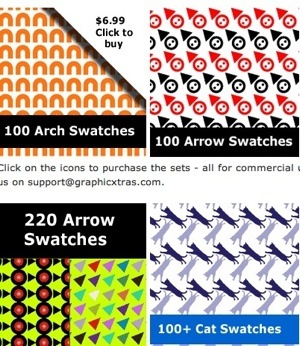 They’re for use in Illustrator fills, effects, convert to other formats and more. The Swatches include 40-plus swatches packs for commercial use, all royalty-free to create items for sale. They’re for use in fills, as well as combined with effects.

The Swatches package now sports over 4,000 patterns in total. It’s compatible with all versions of the Adobe Creative Suite including the latest, CS6.