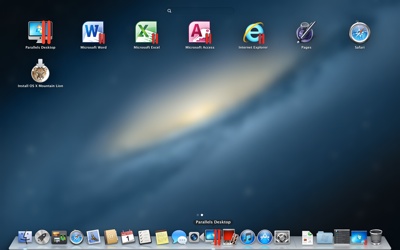 Parallels has launched Parallels Desktop 8 for Mac, the newest version of itssoftware for running Windows and Mac applications simultaneously on a Mac without rebooting.

New and enhanced features of Parallels Desktop 8 make life even better for people who love their Macs and want to simultaneously run Windows apps like Internet Explorer, OneNote, Quicken and more, says said Parallels CEO Birger Steen. From having the familiar Windows desktop in full screen to having Windows run invisibly, Parallels Desktop 8 delivers powerful performance to run Windows applications, even graphic-intensive ones, like they were made for a Mac, he adds. You can use Mountain Lion’s Dictation feature in Windows apps, organize Windows “Metro-style” applications in Launchpad, and enjoy the brilliant Retina-display resolution in Windows applications.

“People don’t need to make an either/or choice between Mac and Windows because Macs running Parallels Desktop 8 empower people to simultaneously use applications that best suit their needs — regardless of whether it’s an app for OS X, Windows, Google Chrome OS, Ubuntu, or even Android,” Steen say. “We hear amazing stories from people every day – from students and teachers who need Windows for classes, and developers working on iOS and Android mobile devices, to businesspeople and parents – who all enjoy the freedom Parallels Desktop for Mac gives them.”

As the “Bring Your Own Device” (BYOD) trend continues to grow rapidly, and more people use Macs in business and at home, Parallels Desktop also offers solutions tailored to specific needs.

Parallels Desktop for Mac Enterprise Edition is tailored to the needs of larger companies and IT departments that want to support Windows-based applications on Macs with a configurable, policy-compliant solution. The Enterprise Edition easily fits into existing business processes and helps reduce the cost of deploying and maintaining client-based software. Details are available at www.parallels.com/desktop/enterprise.

In conjunction with its enterprise focus, Parallels also recently launched the Apple-in-the-Workplace Barometer, a crowd-sourced project for gauging where companies stand in terms of BYOD Mac adoption and support. Discover where your company ranks and gain access to a host of resources for learning about and implementing Macs in the enterprise by taking the survey at www.appleintheworkplace.com.

Parallels also announced the availability of Parallels Desktop 8 Switch to Mac Edition, which includes Parallels Desktop 8 software plus a set of switching tools to automatically move programs, files and browser favorites to Mac, as well as in-box video tutorials to learn about the Mac. Details are available at www.parallels.com/products/desktop/stm (product page available Sept 4).

New and improved features in Parallels Desktop 8 include:

° The ability to use the new Mountain Lion Dictation tool across both Windows and Mac environment;

° When a website doesn’t render well within Safari, you can launch it in Internet Explorer with a click of a button;

° Drag and drop email attachments: simply drag and drop files from the desktop onto the Dock icons for Outlook and other Windows email clients to attach and share them;

° Parallels Wizard: you can download and automatically install Windows or other operating systems (OSes) including Google Chrome OS, Ubuntu and Android on your Mac;

Parallels Desktop 8 for Mac is available beginning today as an upgrade for current Parallels Desktop for Mac users. The full version will be available to new customers on www.parallels.com/desktop starting Sept. 4. Packaged software will also be available starting September 4 at Apple retail stores, Apple.com, Amazon.com, Fry’s Electronics, MicroCenter and hundreds of other resellers and retail locations nationwide.

The Parallels Mobile app, which works with Parallels Desktop for Mac to give full access to both Mac and Windows applications from an iPad, iPhone or iPod touch, is currently available in the App Store for a special price of $4.99.