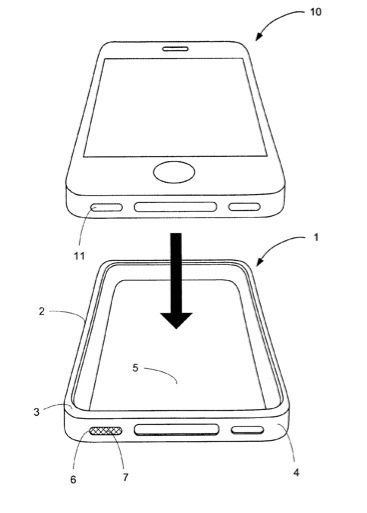 An Apple patent (number 20120177239) for a removable case design offering wind noise protection for the iPhone has appeared at the U.S Patent & Trademark Office. It would sport a windscreen over the smartphone’s microphone to improve sound quality.

The invention (top graphic) is for a removable case for a mobile communications device includes an opening that aligns with a microphone port that is built into the device. The case includes a windscreen that is sealed across the opening of the case. The windscreen is designed to reduce wind noise, air blasts, vocal plosives, and other noise. Other embodiments are also described and claimed.

Here’s Apple’s background and summary of the invention: “Handheld mobile communications devices, particularly mobile phones, have enabled users to engage in real-time two-way conversations while walking, running, riding in a car, or during other activities. In a number of these situations, a user may be conducting a conversation in a noisy environment, such as outside in the wind or inside a moving car with its window down.

“A removable case for a handheld mobile communications device is described. The removable case includes an opening that aligns with a microphone port that is built into the device. A windscreen is sealed across the opening of the case. The windscreen is designed to reduce wind noise, air blasts, vocal plosives, and other noise. This may enable the speech of a user of the device to remain intelligible despite the presence of such noise during a call, and without requiring the user to shout into the device’s microphone.

Jae Han Lee is the inventor.

Also, when it comes to mobile devices, Apple has filed for a patent (number 2012017087) for a portable device with a clip having electric terminals (bottom graphic). Apparently with the iPod nano in mind, it would offer a clip that doubles as method for charging/syncing the device.

The inventors are Jeffery T. Lee and Scott Krueger.

Autodesk Inventor Fusion available a ‘tech preview’ on the Mac