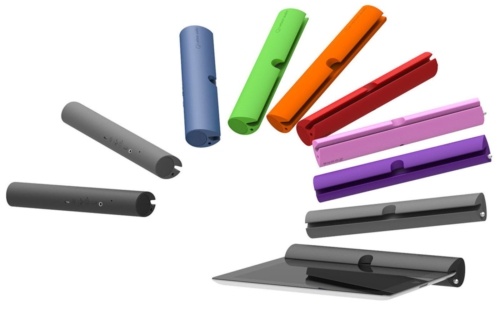 Carbon Audio (http://www.carbonaudioinc.com)has launched the Zooka, a slide-on speaker bar designed as an accessory primarily for Apple products, including the iPad, iPod, iPhone and MacBook.

According to Mark Schneider, CEO of Carbon Audio, the Zooka can “project” sound through wireless Bluetooth, allowing the speaker to be moved up to 30 feet away from the parent device. A built-in microphone lets you use your iPad as a speakerphone with Skype, FaceTime and other communication software.

Zooka slides onto the edge of an iPad or MacBook without inhibiting the use of the camera. It has a removable kickstand. With a retail price of US$99.95, Zooka is available in nine colors including black, blue, dark grey, green, orange, pink, purple, red and teal and will be released in August.