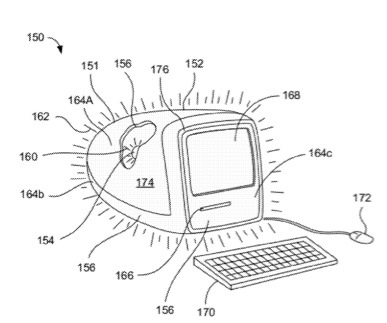 An Apple patent (number 20120133301) for an active enclosure for a computing device has appeared at the U.S. Patent & Trademark Office. It revives an idea mentioned in previous patents for computer hardware that gives feedback depending on the task on which you’re working. In fact, the patent even mentions multi-colored iMacs, which apparently references the early incarnation of Apple’s all-in-one desktop.

Here’s Apple’s background and summary of the invention: “Most computing devices, including portable computers and desktop computers, give feedback to its user via a display screen or speakers. As is generally well known, display screens are used to display textual or graphical information to a user and speakers are used to output sound to the user.

“Recently, manufacturers have attempted to remedy this problem by offering brightly colored or translucent housings for computing devices. For example, some computer and telephone manufacturers now sell a variety of housings, which have different colors and patterns. By way of example, the iMac computer, which is produced by Apple Inc., of Cupertino, Calif., is available in various colors and patterns.

“Although these recent advances make substantial inroads to overcoming the same old appearance, the housings for the computing device remain passive structures that exhibit a non-adaptable or non-changing appearance. That is, a colored or patterned housing has a single color or pattern associated therewith that does not change overtime.

“External lights have been used in some devices associated with displaying video to enhance the viewing experience of the video. Unfortunately, however, none of the external lights have been capable of changing the visual appearance of the device housing. That is, the external lights are typically located outside the periphery of the housing and are typically arranged to alter the environment in which the video is shown rather than the device housing itself (the appearance of the housing remains the same even with the use of lights). Thus, there is a need for improvements in appearances of housings for computing devices.

The inventors are Duncan R. Kerr and Steve P. Hotelling.