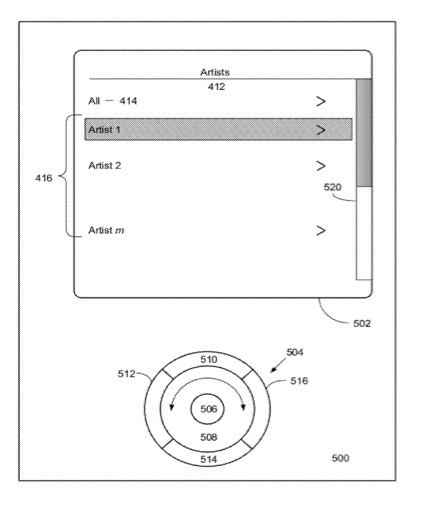 Apple has been granted a patent (number 8188357) by the U.S. Patent & Trademark Office for the graphical user interface and methods of use thereof in a multimedia player. Think iTunes.

In a portable multimedia device, a method, apparatus, and system for providing user supplied configuration data are described. In one embodiment, a hierarchically ordered graphical user interface is provided. A first order, or home, interface provides a highest order of user selectable items each of which, when selected, results in an automatic transition to a lower order user interface associated with the selected item. In one of the described embodiments, the lower order interface includes other user selectable items associated with the previously selected item from the higher order user interface. The inventors are Jeffrey L. Robbin, Steve Jobs, Timothy Wasko, Greg Christie and Imran Chaudhri.

Several other Apple patents also popped up today at the U.S. Patent & Trademark Office. They include:

Patent number D660315 is for an icon for a portion of a display screen.

Patent number RE43438 is for an extensible, replaceable network component system that provides a platform for developing network navigation components that operate on a variety of hardware and software computer systems.

Patent number 8190614 is for systems and methods for compressing an index are described. In one exemplary method, the results of a search are annotated and then encoded into one or more chunks of compressed data in accordance with the annotations of the results.

Patent number 8190566 involves methods and apparatuses of a trusted index structure in a network environment. In one embodiment, a data processing system includes a master device and at least one slave device to communicate with each other through a network; and a master lock status of a shared storage device to determine the master device.

Patent number 8190205 is for the design of a male plug connector in a media player.

Patent number 8190123 involves a system for authentication of network usage.

Patent number 8190017 is for a method in a camera device having an image sensor and an electro-mechanical shutter mechanism.

Patent number 8190656 is for methods and apparatuses for managing file extensions in a processing system.