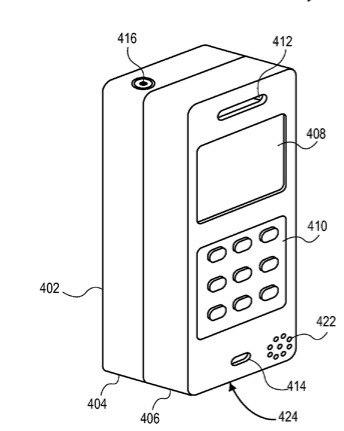 Apple is working on ways to improve its speakers, especially on its small, mobile devices such as the iPhone. An Apple patent (number 20120128190) for a gas filled speaker volume has appeared at the U.S. Patent & Trademark Office.

“This back pressure retards the movement of the diaphragm and degrades the quality of the sound being reproduced. To effectively enlarge the volume of the speaker enclosure, the air within the enclosure can be replaced with a gas that is less dense than air.

“However, with mobile devices, the barometric air pressure surrounding the speaker enclosure can decrease or increase abruptly, for example when the user is riding in an elevator. This will result in a net force being exerted on the diaphragm of the sealed speaker system, causing it to “stick” and therefore stop producing sound until the pressure inside the speaker has equalized with the barometer pressure (due to leakage).

“In air speaker systems, such barometric equalization is achieved relatively quickly (in order to prevent noticeable sticking of the diaphragm), by adding a small vent hole to the enclosure (at the expense of a small amount of sound quality degradation). This solution however will not work for an enclosure that is filled with gas and no air.

Along the same line is patent number 20120128189, which involves an integrated speaker assembly for a personal media device. Systems and methods are provided for media devices including a housing, a frame disposed adjacent to the housing, and an acoustic source that is integrated with the frame for emitting sound from the media device.

Here’s Apple’s summary of the invention: “The invention, in various embodiments, addresses deficiencies in the prior art by providing systems, methods and devices that enhance the ability of the acoustic source to withstand physical stresses and enhance sound quality while respecting the need for a compact and portable form factor for such devices.

“By integrating the acoustic source with a frame having greater structural strength and integrity, the ability of the acoustic source to withstand physical stresses or vibrations is enhanced. The term ‘integrated with’ may include integrally formed with, unitarily formed with, attached to, detachably connected to, mounted on, or any like permanent, semi-permanent, or temporary configuration whereby the acoustic assembly, or a portion thereof, is in physical communication or contact with the frame of the media device.

“In one aspect, a media device includes a housing, a frame disposed adjacent to the housing, and an acoustic source that is integrated with the frame for emitting sound from the media device. The frame may be disposed substantially within the housing. The frame may include a sidewall or plurality of sidewalls. At least one sidewall may include an aperture in acoustic communication with the acoustic source.