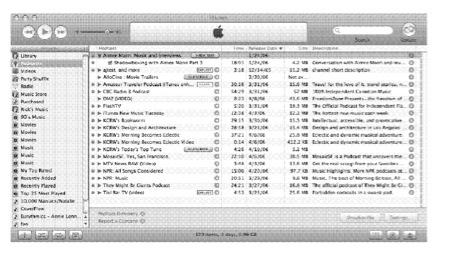 An Apple patent (number 8180895) for managing podcasts has appeared at the U.S. Patent & Trademark Office. Improved techniques that facilitate the use of podcasts are disclosed. The improved techniques can pertain to publishing, hosting, accessing, subscribing, managing, organizing, searching, browsing, transferring, and/or playing podcasts.

“Podcasts are typically used to share content from websites. Podcasts are typically associated with Really Simple Syndication (RSS) feeds, which use a lightweight XML format. A podcast can be organized into episodes much like a radio or television program. An interested person can subscribe to receive podcast episodes that are subsequently published. This is achieved by the interested person using their computer to access a podcast website that hosts the RSS feed. The interested person can then subscribe to the RSS feed such that their computer occasionally re-visits the podcast website to check for any new podcast episodes.

“Typically, if a new podcast episode is available, it is downloaded to the computer. Thereafter, the interested user can play the podcast episode at their computer in the same manner as other audio files (e.g., MP3 files). A utility program can be used to download the audio files to a portable media player (e.g., MP3 player). One example of such a conventional utility program is “iPodder,” which is a small program that runs on one’s computer to download audio files to one’s portable media player.

“Unfortunately, podcasts are conventionally not easily managed. Podcasts often dynamically change as new episodes are released. Management of such dynamic media assets is complicated. Additionally, to the extent that a host computer desires to support a portable media player, the host computer needs to manage the transfer of podcast data to the portable media player. In addition, due to the increase in the number of podcasts that are available, it has become more difficult to manage and organize the podcasts. Thus, there is a need for techniques to manage and organize podcasts on computers.”

° Patent number 8180093 for an assembly for coupling the housings of an electronic device. The inventors are M. Evans Hankey and Emery Sanford.

° Patent number 8177560 for an electrical plug and receptacle relying on magnetic force from an electromagnet to maintain contact are disclosed (the MagSafe plug on Apple laptops, in other words). The inventors are Matthew Dean Rohbach, Mark Edward Doutt, Bartley K. Andre, Kanye Lim, John C. DiFonzo and Jean-Marc Gery.

° Patent number 81779371 for displaying one of a plurality of soft keyboards in a first display area and input characters in a second display area (such as the iPad virtual keyboard). Kenneth Kocienda and Richard Williamson are the inventors.

° Patent number 8179419 for a video conferencing system having video and/or audio capture device for video and audio communications (think FaceTime). Muthya K. Girish and Jay Fredrick Hamlin are the inventors.

° Patent number 8181119 for an user interface with inline customization. Bas Ording is the inventor.