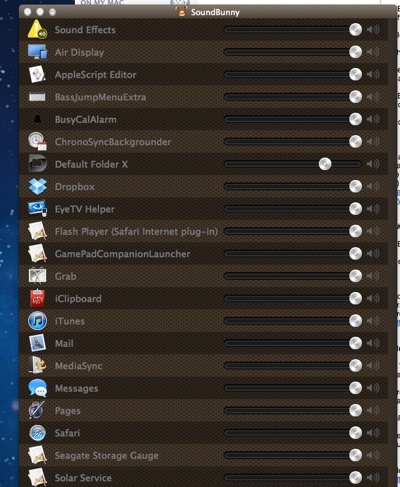 Prosoft Engineering’s new SoundBunny (http://www.prosofteng.com/products/soundbunny.php) is one of those simple, inexpensive (US$9.99) apps for Mac OS X 10.6.8 (or higher) with one purpose: it lets you independently control the volume level for any open applications on your Mac. And it does it with aplomb — on a Mac’s built-in speakers.

SoundBunny is easy to set up and use. Download, install, restart your Mac and you’re good to go. The restart is so that the software can load core system processes properly.

That done, with SoundBunny running, a list of all open apps appears in its interface. Simply drag the volume level sliders for each open application to set the volume as you’d like.

The software offers an Ignore list. You can add any apps you want SoundBunny to, well, ignore. (Note that when an app is removed from the ignore list, you have to restart your Mac.)

You also have the option for a SoundBunny icon to appear in the Mac menu bar or not. And you can show the icon in grayscale or color.

The beauty of SoundBunny is that you can listen to your music or movies as loud as you’d like with no incoming email whoosh or iChat/Messages ping interrupting your listening/viewing pleasure.

However, there’s one major flaw: SoundBunny doesn’t work with external speakers. I’ve tried it with the Tango Bar from XtremeMac and Boss Companio speakers, all to no avail.

Also, it would be nice if you could implement SoundBunny to activate your preferences as soon as an app launches rather than having to do it AFTER the app is up and running. Perhaps we’ll see that in a future version.

And, hopefully, support for external speakers.