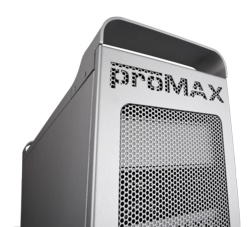 “Since Apple discontinued its widely popular Final Cut Pro 7 software a year ago, many in the professional industry have been transitioning to AVID and Adobe software platforms,” says Jess Hartmann, CEO of ProMAX Systems. “However, until now, they have had few good workstation options to meet their increasing demands. And with the future of Apple’s Mac Pro workstation murky at best, we knew it was time to offer up a solution.”

He says the ProMAX ONE has more processing power than the current 12-core Mac Pro, includes up to 18TB of raw RAID 6 disk storage, has four 2.5-inch boot drives for flexibility and includes options for an LTO tape, and a P2/CF/ SxS card reader. Built on Microsoft Windows 7 Professional 64-bit operating system, the ProMAX ONE has been validated with Adobe Premiere Pro CS5.5, Avid Media Composer 6.0, Assimilate Scratch and Scratch Lab. It works with I/O cards devices from Avid, AJA, Blackmagic, and Matrox, as well as other third party solutions such as Red Rocket.

With the ability to handle up to 5K footage on the timeline in Adobe CS5.5 and Assimilate Scratch both utilizing high end PNY Quadro compatible video cards, this workstation is capable of handling highly complex and taxing workflows without the need for external devices, says Hartmann. The design of the system also provides the ability to place the unit in a computer rack if necessary.

The ProMAX ONE will be demonstrated at the upcoming NAB Show in Las Vegas Nevada, April 16-19, Booth SL5424. Pricing hasn’t been announced.