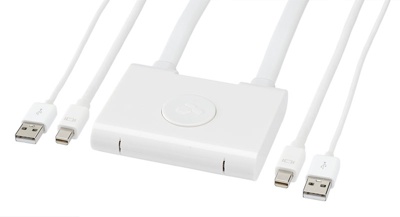 Need to put two Macs onto one Cinema Display? You can with Kanex’s (http://www.kanexlive.com/snapx) US$69 SnapX two-port switcher. It’s designed specifically for 24 and 27-inch Apple LED Cinema Displays (ACD).

Set-up is simple. You plug in both Macs to the built-in, five-foot mini DisplayPort and USB cables. Next you plug in the ACD native display cables to the SnapX. You toggle between the two Macs by pressing the button on the top of the Snap X. Once linked, you can use the iSight camera and direct the audio of the connected computers through the ACD speakers without altering the audio or video quality.

The SnapX features an ergonomic, clip-on design that attaches to the bottom of the ACD stand and tidies things up by hiding the wires. A nice touch: it organizes all wires behind the display providing a clutter-free environment, which reduces stress on the connectors preventing intermittent signal loss due to loose cable connections.