Apple patents are for camera improvements 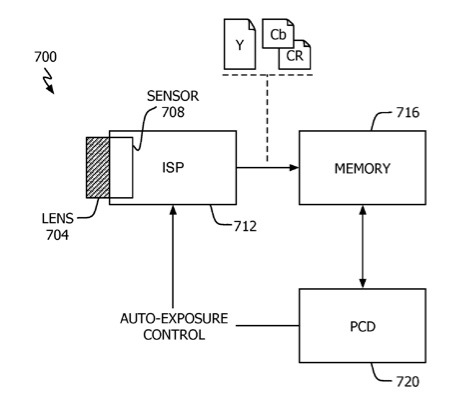 Three Apple patents have popped up that show that Apple is working on ways to further improve the cameras on its iOS devices.

Patent number 20120057073 is for scene-aware, automatic exposure control. Per the patent, scene-aware auto-exposure control process stabilizes changes in a camera’s auto-exposure settings so as to reduce lighting and color flicker during image capture operations. A metric, referred to as the Modified Adjusted Luminance (MAL) metric, is defined to remain relatively constant as long as the lighting of the scene being captured remains relatively constant.

When incoming frames result in a substantially different MAL over a specified number of frames, auto-exposure operation may be restored. The inventors are Douglas Price, Xiaosong Zhou, Hsi-Jung Wu and James Oliver Normile.

Patent number 20120057064 is for a camera-based orientation fix from portrait to landscape. A portable electronic device includes a camera and a display switchable between a portrait mode and a landscape mode in response to an inertial sensor. Per the patent, when it is determined that the display mode should be switched in response to movement of the device, a feature of a user of the device, such as the user’s face, is imaged with the camera.

If the imaged feature changes orientation with respect to the display by less than a threshold amount, then the switch in display mode is disabled and the display remains in its current mode. Other embodiments are also described and claimed. The inventors are Koji Garadiner, E-Cheng Chang and Jason Rukes.

Patent number 20120057039 involves an auto-triggered camera self-time based on the recognition of a subject’s presence in a scene. Per the patent An automated image capture mode of a camera in an electronic device insures that a particular subject appears in the captured image. An image of the particular subject, which may be the photographer, is initially captured. Subsequently, another image capture is automatically triggered when the same subject is detected within the camera’s field of view.

In one embodiment, a motion sensor within the device may be employed to begin a search for the subject, when the camera is subjected to a sudden movement. Other embodiments are also described and claimed. The inventors are Koji Garadiner, E-Cheng Chang and Jason Rukes.