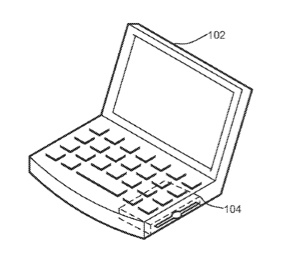 A new patent (number 20120020644) from Apple at the U.S. Patent & Trademark Office for playing data from an optical media drive.

Here’s Apple’s background and summary of the invention: “An optical media drive facilitates reading of different types of data that may be stored on an optical media, of which Compact Disks (CD’s) and Digital Versatile Discs (DVD’s) are common examples. The optical media is a circular disk having a generally flat surface, with data stored in the form of pits formed on the flat surface of the disk, or in some other optically identifiable form.

“Additionally, once many such systems are revived from the lower power state, the systems typically require reacquiring of access information regarding the loaded optical media, before reading of the desired data may be resumed. Either of these operational situations leads to less than optimal power management for use of the optical media drive. However, power management can be a significant concern when operating many systems, particularly ones that operate from a finite capacity power source, such as a battery.

“Example embodiments provide various techniques for playing data from an optical media drive. In general, examples of the invention as described herein allow for efficient reduction of power consumption by optical media drives. The examples are described herein primarily in the context of reading of audio, video, audio/video and other multimedia data files, as such data typically has a fixed rate at which the data may be played back, or otherwise utilized, and thus provides a particularly useful context for describing the benefits of the described invention.