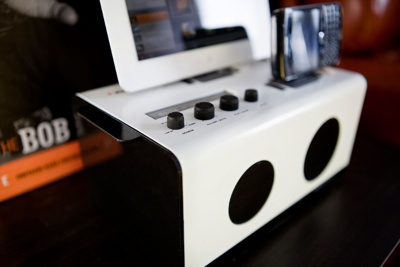 Bracketron has announced the new iRoom iDock Touchcode at this week’s Consumer Electronics Show in Las Vegas. The original iRoom iDock was the first powered and motorized in-wall mounting solution for iPad and a 2012 International CES Innovations Award winner.

The new Touchcode model ensures that your iPad is safely stored in the docking station and only releases the tablet upon entering a programmable four-digit code, according to Christian Johnson, president of Marketing at Bracketron. The iRoom iDock Touchcode is designed especially for residential and commercial settings such as hotels, offices, showrooms, tradeshows and even private homes.

The iRoom iDock Touchcode can be flush-mounted to integrate the iPad into any room. A patented motorized docking system opens and closes the iDock to securely store the Applet tablet. The dock also includes both power and composite audio internal connections. The mount’s faceplate comes in piano black and opal white, or can be color customized.

The iRoom iDock Touchcode features a proximity sensor that causes the code panel to light up when you’re nearby. When the correct four digit security code is entered, the iDock switches to the open position allowing you to retrieve your iPad.  After 10 seconds the iPad door closes again automatically.

To reinsert your iPad, the iDock can be opened without a code by using the existing proximity switch. When the iPad is inserted into the dock, you have total control of smart home applications on the device while it’s also being charged. The iDock also automatically charges the iPad battery when mounted.