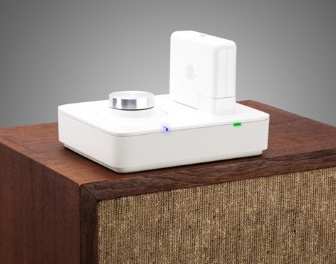 At this week’s Consumer Electronics Show, Griffin Technology (http://www.griffintechnology.com) will debut Twenty, an audio amplifier that uses an Airport Express to capture the AirPlay stream, decode it, then send the lossless, amplified sound through speakers.

“The Griffin Twenty is the easiest, best-sounding solution for consumers who have speakers that are not AirPlay-enabled but still want to stream high-fidelity audio wirelessly,” says Mark Rowan, president of Griffin Technology. “Not only can users stream from their iTunes library, they can easily connect with any AirPlay-enabled iOS device.”

Twenty boasts a zero-configuration audio set-up that streams Apple Lossless sound from iTunes or any other AirPlay-enabled app (Pandora, Spotify, last.fm, etc.) to the user’s speakers via a low-profile digital amplifier. It comes equipped with a power connection and mount for Airport Express.

Twenty features a 2.1 channel sound system with 20 watts output per channel and also supports a powered subwoofer with an automatic active crossover at 80 Hz. It’s “coming soon,” but pricing hasn’t been announced.

ComputerWare comes back this Saturday