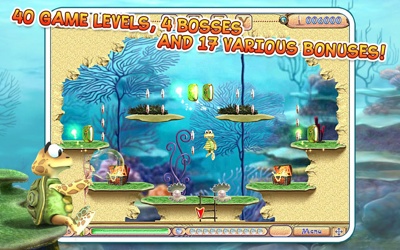 Ozzy Bubbles, an arcade game set in the underwater world of the Atlantic Ocean, has come to the Mac Game Store. It requires Mac OS X 10.6.6 or higher and costs US$6.99.

Here’s how the game is described: “Gamers play as Ozzy – a friendly turtle living under the sea. One day he decides that it is time to go and seek for adventures in the open. Very soon Ozzy discovers that the Ocean is not a friendly place for such a little creature like him. Piranhas, crabs, squids and many other underwater predators would be more than happy to eat Ozzy for lunch. Luckily he has several means to defend himself.

“In addition to a classical head-jump the turtle is able to shoot air-bubbles that imprison his enemies for a limited period of time. After the foe is bubbled and becomes unable to move, Ozzy has several seconds to pop the air balloon and eliminate the danger. Some of the monsters leave power-ups that enhance various Ozzy’s characteristics and help him fight the monsters more effectively.

“Other bonuses open access to the areas of the level that were previously impossible to reach. Some of the most dangerous sea bottom creatures keep the keys that Ozzy has to collect in order to open the door to the next level. Some of these doors are guarded by huge and awesome bosses. Every boss-fight in the game is a unique event.”

Analyst: CDMA-version of the iPhone could net Apple $6 billion