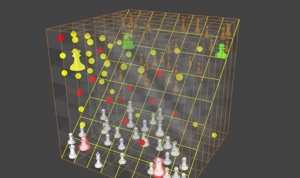 Here’s how the game is described: “InCube Chess is a new stage in evolution of the classic chess game, which is transferred into three-dimensional space. Overcoming limitations of two-dimensional classic chess, Chess InCube saves their traditions and basics, but invests a lot of new possibilities.”