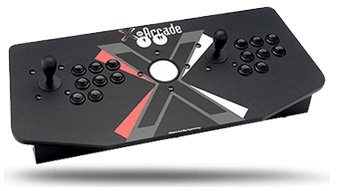 The holiday season is fast approaching and lots of Mac-using girls and boys (and men and women) are thinking of, giving and receiving computer games. To take full advantage of the games, you’ll need the right peripherals. Being Santa’s helpers, we’ve compiled a look of some of the accessories out there for Mac gamers. This is part four.

X-Arcade (http://www.xgaming.com/store/category/arcade-joysticks-and-game-controllers/
shawn@xgaming.com), a company dedicated to re-creating the arcade experience, does just that with the $1.99 X-Arcade Tankstick + Trackball. It’s an authentic arcade panel and trackball that works with Mac, PC and Linux computers, though the trackball is operational on the Mac and PC only.

M.A.M.E. OS X (http://mameosx.sourceforge.net/) stands for Multiple Arcade Machine Emulator. When used in conjunction with images of the original arcade game’s ROM and disk data, MAME attempts to reproduce that game as faithfully as possible on a more modern general-purpose computer. MAME can currently emulate several thousand different classic arcade video games from the late 1970s through the modern era. There is one (sorta) catch: whether or not it’s legal to download ROMs for a game is a bit shady.

Owning and distributing MAME itself is legal in most countries, since it’s just an emulator. Some companies such as Sony and Nintendo have tried — unsuccessfully so far — in court to prevent emulators from being sold.

The situation regarding ROM images of games is less clear-cut. Most arcade games are still covered by copyright. Some copyright holders have been indecisive regarding making licensed MAME ROMs available to the public. For example, in 2003 Atari made MAME-compatible ROMs for 27 of its arcade games available through the Internet site Star ROMs. However, the ROMs are no longer being sold there.

Kensington does’t make trackballs or joysticks, but they make a couple of products they pitch to gamers as “providing extra power, comfort and connectivity to their Mac gaming devices.” The $49.99 Kensington SlimBlade Media Mouse combines a mouse and media controller into one slim device. It’s a laser mouse with a Scroll Ball provides 360-degree scrolling. The navigation pad on the media controller includes: volume control, track control, play and pause.

The $129.99 SlimBlade Media Notebook Set magnetically attached modules on the left or right side of the keyboard. The three-module set includes a wireless keyboard/laser mouse/keypad. You can add a media remote (module sold separately at Kensington.com) to enjoy your digital media and control Front Row from anywhere in a room.

RBulk Builder is a Batch Building companion for REALbasic

Take Control of Maintaining Your Mac