Apple held its “Let’s Talk iPhone” event yesterday, so here are some random thoughts on what transpired — and what didn’t.

New CEO Tim Cook and the gang (Scott Forstall, Eddy Cue and Phil Schiller) did a fine job at the presentation. They showed that you don’t have to have Steve Jobs (still the ultimate showman) to put on a gee-whiz event, especially when you divvy up the duties among such a talented bunch of Apple execs.

I predicted that Sprint and T-Mobile would be announced as iPhone carriers. Sprint is on-board, but not T-Mobile (yet).

I predicted a specific release date for iOS 5 and iCloud but said they wouldn’t roll out this week. On this I was right; they’re coming Oct. 12.

I predicted new iPod touches and iPod nanos, but no Apple TV updates. Right again. However, I also predicted the end of the iPod shuffle and the iPod classic. But they’re still around, though not updated.

Most of the announcements were positive ones. However, I was disappointed that iCloud’s Documents in the Cloud feature will apparently keep your documents up to date across all your iOS devices, but not Macs. Or am I missing something? I want Apple’s iWork apps (Pages, Numbers and Keynote) to take advantage of iCloud storage, and update across ALL my devices — including my Macs.

Finally, as for those who are crying that no iPhone 5 was announced. Exactly what is missing in the iPhone 4S that you were expecting — except for, perhaps, a bigger screen? 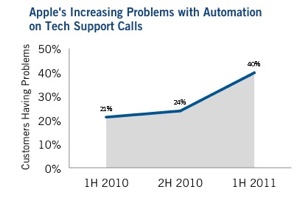