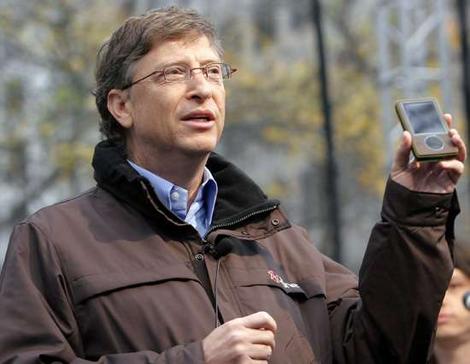 The high tech miracle, a true cosmic wonder (pictured in the brown jacket), has officially been rendered obsolete. Actually, the high tech wonder on the right is the now obsolete item, Microsoft’s Zune Music Player. Bill Gates, also wearing a brown jacket, shown on the left, is still alive and doing his best to spend his money well, as Ballmer is doing his best to run Microsoft further into the ground. I wonder if Gates will relent now and allow his kids to own an Apple iPod now that the Zune is dead?

The history of Microsoft’s Zune is similar to a street with so many pot holes the notion of it ever having been blacktop is long forgotten. The Zune was to be the Microsoft carbon copy of Apple’s iPod and allow Microsoft to make a lot of money selling Zunes and music on-line. The Zune never really took hold in the market place. Microsoft could clone the electronics, but not the Steve Jobs sizzle, the chemistry that made everyone want an iPod.

Apple iPods were cool, Microsoft Zunes were not cool. Zunes were widely spurned by kids and adults alike, who bought genuine iPods instead. Microsoft pushed and advertised the various flavors of Zune to no significant effect. The Zune may now take its place in a museum of obsolete electronic devices, perhaps beside the Kin phone, other Microsoft duds, HP Touch Pad or the RIM PlayBook. My daughter is 12 and she swears she didn’t even know what a Zune was.

Ironically, a number of older iPods are also just about to be phased out, according to rumors. Even wildly successful electronic devices that have made a ton of money still have a product life expectancy and must make way for new technology. The iPod touch is so popular it is expected Apple intends to do away with a lot of the older high end iPod models. We will see what the new iPod line-up looks like Tuesday, Oct 4.

Oops, checking other news web sites, Microsoft may not have actually canceled the Zune; this is all according to rumors. I will keep you posted when the situation becomes clear. Perhaps today the rumors of the Zune’s demise will be confirmed or officially denied by Microsoft. Clearly, the Zune has been a disappointment to Microsoft and consumesr who bought one.

Sprint bets the farm on iPhone 5. The web is loaded with stories that stem from a report in “The Wall Street Journal” stating that Sprint, the second string cell phone network, has promised Apple US$20 billion for 30.5 million iPhones to be delivered over the next four years. Sprint has purportedly agreed to buy the iPhones from Apple even if they can’t sell them. (Personally, even for a free iPhone 5, I wouldn’t do business again with Sprint) The market cap for Sprint is only $9 billion, so contracting to pay $20 billion to Apple over four years is nuts. “The Wall Street Journal” is rarely wrong, so lets see what transpires today at the iPhone event….

Presumably, if Sprint defaults on the deal, Apple will be in the cellular network business and will be able to fire everyone who works at Sprint and start over with nice people and reasonably good equipment. Perhaps Apple ought to just buy Sprint anyway and change the name to Apple Cellular. I would likely give them my business once the staff is replaced with Apple quality customer service personnel.

The Street is very worried that Sprint has taken on more than it can sell and sprint stock is off 10% since the news broke. The Nextel deal just about took Sprint out some years ago since the two networks were not well suited for a merger. Nextel was strong in the enterprise market and when Sprint took over customer service was so bad long term customers quit Nextel in droves. Rumors are that Sprint customer service has improved, which is the only change it could make since is was so bad.

That is Greg’s Bite, anyhow…

Apple fined for violating rights of some Chinese authors