FIFA Soccer 12 kicks onto the Mac 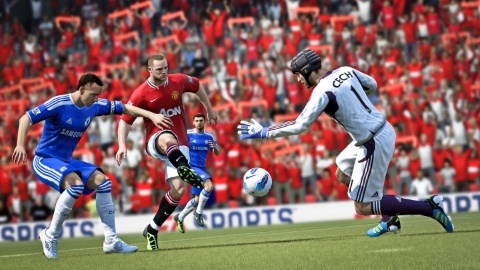 Electronic Arts says EA Sports FIFA Soccer 12 (http://www.ea.com/soccer/) is in retail stores now throughout North America, and will be available in the rest of the world beginning Sept. 30. Launching on 12 different platforms — including Mac for the first time ever. The Mac version costs US$39.99.

Here’s how the game is described: “FIFA Soccer 12 brings to the pitch the game-changing new Player Impact Engine, and revolutionary gameplay innovations inspired by the real-world game, including all-new Precision Dribbling, Tactical Defending, and Pro Player Intelligence. Plus, new live services and breakthrough social experiences like EA SPORTS Football Club, and FIFA Ultimate Team, will deepen fans’ connection to the real-world game, their favorite club, and their friends, rivals and millions of other players around the world in the massive FIFA online community.

“FIFA Soccer 12 on Mac has the same revolutionary core gameplay features as the HD consoles, and for the first time ever, Mac and PC gamers can play with and against each other in online head-to-head matches. For the first time ever, FIFA Soccer 12 in North America is launching with a dedicated broadcast and digital advertising creative campaign with an all-star cast of celebrities.