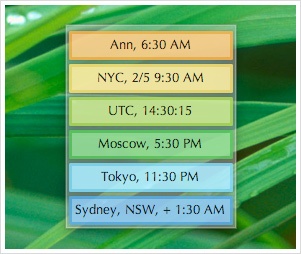 Also, the configuration of the show/hide palette keyboard shortcut has been revised so that Unicode keyboards and the F17, F18, F19 keys are now supported. In addition to that, shortcuts containing function keys, arrow keys, or keypad keys do not require modifiers anymore and keypad keys appear in square brackets [ ] in the Palette pane of World Clock Deluxe Preferences.

In version 4.7.7, the offset from UTC of Ust-Nera and Kuril Islands, Russia has been updated after somedistricts of the Sakha Republic moved from Magadan Summer Time (UTC+12) to Vladivostok Summer Time (UTC+11) on Aug. 31. Also, Daylight-saving time information for the Palestinian Territories, Samoa, Ukraine, and the Canadian province of Newfoundland and Labrador has been updated.

With World Clock Deluxe you can display multiple clocks in a horizontal or vertical palette, in the menu bar and in the Dock, show Coordinated Universal Time and Internet Time, assign labels and colors to clocks, calculate date and time conversions across different time zones and show the current weather all over the world. The software is Universal Binary and runs in English, German, Dutch, French and Italian.

World Clock Deluxe requires Mac OS X 10.4 or later and runs natively on both PowerPC-based and Intel-based Macs. It costs US$19.