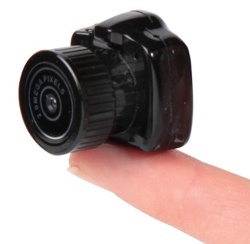 Hammacher Schlemmer has introduced The World’s Smallest Camera (http://macte.ch/hfIki), a fully functional, US$99.95 digital camera no larger than a fingertip.

Measuring just over one inch in all dimensions and weighing only half an ounce, the camera appears to require Lilliputian dexterity, yet a human finger can snap a picture with a touch of the shutter button, according to Hammacher Schlemmer General Manager Fred Berns. It provides automatic focus and has a 2MP image sensor that captures JPEG photographs at 1600 x 1200 resolution and AVI video at 30 frames-per-second with 640 x 480 resolution.

The pictures and videos are saved onto the included 2GB micro SD card. The World’s Smallest Camera can be connected to a computer for displaying images and video.

The World’s Smallest Camera comes with a wrist lanyard. The camera’s rechargeable battery provides up to 30 minutes of operation from a one-hour charge via the included USB cable.

Buy or Upgrade to QuarkXPress 2016, get one new, full license free