Runespell conjures on the Mac 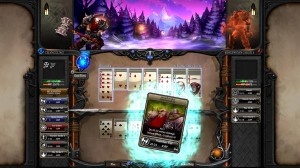 Mystic Box’s Runespell is now available at the Macgamestore (http://www.macgamestore.com). It costs US$9.99.

Here’s how the game is described: “Runespell: Overture is a role-playing game combining poker mechanics with power ups and collectable cards. The world is set in an alternate medieval Europe linking historical characters with Norse mythology and sagas. The player takes on the role of the Changeling, the son of a monster god, in search of his nemesis.”

Features include: a mythic poker system using poker mechanics to battle your opponents; the ability to unlock power ups and special attacks available as collectable cards in the game; more than 30 monster types; the ability to unlock new battle locations through questing; and leaderboard support. Runespell: Overture is set in an alternate medieval Europe.