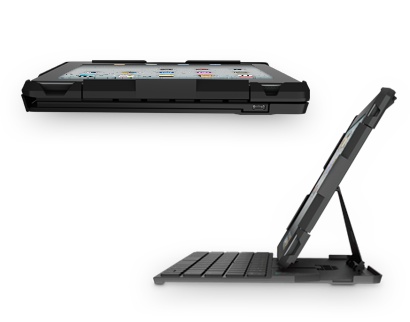 Logitech (http://www.logitech.com) has unveiled two new accessories for the iPad 2: the Fold-Up Keyboard and Joystick for iPad.

The Logitech Fold-Up Keyboard offers a full-size, Bluetooth keyboard and stand; you simply open and type, and close and forget, says Azmat Ali, Logitech vice president of mobile and tablet products. Closed, the keyboard rests securely underneath your Apple tablet. Open, it holds the tablet at an angle for typing and taking notes.

The Logitech Fold-Up Keyboard for iPad 2 charges over USB. The device wakes up and is ready to use as soon as it’s unfolded, and turns itself off automatically when folded to save battery power.

The Logitech Joystick for iPad gives you a thumb-stick style game controller that you can use with just about any game with an on-screen joystick or d-pad. The device attaches to your iPad with removable suction cups. The coiled spring provides force feedback that automatically returns the joystick to the center position.