BuBuCompany has announced ParticleCreator 3.0 for Mac OS X (http://blog.naver.com/h0965/70105136676), an update to their developer tool designed to simplify the creation of particle effects for use in Cocos2d games.

Built to replace the slow work of adjusting code variables to create a desired particle effect, the graphical tool allows developers to generate, preview, modify, test, and save a customized effect. Once the effect is saved, ParticleCreator automatically generates the Cocos2d code, which can be added to the project’s Resource Folder.

ParticleCreator sports a Settings Window with sliders/number fields that control every aspect of the particle’s appearance and behavior. The software has a single settings window from which users can choose one of four buttons: Graphic Configure, Particle Configure, Code Make, and Testing. A Preview window displays the animated particle(s) in real-time, or it may be displayed fullscreen.

ParticleCreator requires Mac OS X 10.6 or higher. It costs US$1.99 and is aavailable worldwide through the Mac App Store in the Developer Tools category.

Sony to take on iPod with PSP 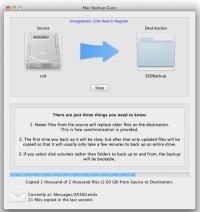