Cost is most important factor when choosing mobile video apps 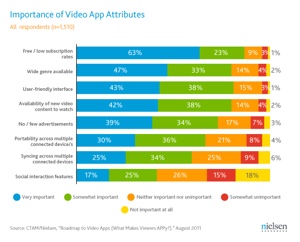 When it comes to mobile video apps like YouTube, Hulu or Netflix, consumers say the best things in life are free. According to a new study released by the Cable & Telecommunications Association for Marketing (CTAM) and Nielsen (http://www.nielsen.com), 63% of survey respondents said that “free or low subscription rates” is the most important attribute for a video app.

In fact, as long as consumers can get the video app for free, or at a low cost, more than half (56%) of respondents said they don’t mind mobile advertisements on video apps –especially if it allows them to access content for free. In addition, 65 percent of video app users surveyed said that word-of-mouth plays an important role in deciding which video apps to use.

The study also showed that video app usage increases consumer engagement with TV programs, networks and related websites. Roughly 85% of video app users surveyed said they watch the same amount or more of regularly scheduled TV since they began using video apps, and nearly half (46%) reported being more engaged with the programs or networks associated with the video apps after accessing them. In addition, 35% report that video app usage causes them to visit the network or program website associated with the video app more than they had before they started using the app.

Nielsen and CTAM also conducted the first-ever qualitative study of “sync-to-TV” apps which found these apps increase consumers’ engagement with television programming rather than distracting from it. Sync-to-TV refers to a second screen app on a tablet device that recognizes audio codes embedded in a program as it’s broadcast through a TV set, and launches interactive and social networking features on the device that correspond with the programming on the TV screen.

Study participants reported that the sync-to-TV experience made them more likely to pay heightened attention to the program, thus increasing their engagement with the program and advertising, and keeping them tuned in longer.