Apple’s efforts to get Amazon to stop using the word “App Store” to describe its, well, app store haven’t been successful yet, but Jobs & Company have caused Amazon some trouble in Germany. Amazon has recently stopped accepting new apps from developers there because of Apple’s legal action, reports “SplatF” (http://macte.ch/33i93).

However, Apple will “probably” lose its court bid to stop Amazon.com Inc. from using the term “App store” for a service selling programs for Android devices, reports “Bloomberg Businessweek” (http://macte.ch/evXDr). In June, U.S. District Judge Phyllis Hamilton said after a hearing in Oakland, California, Wednesday that she is “probably” going to deny the motion because Apple hasn’t demonstrated confusion among consumers. Hamilton said she will review court filings before issuing a final decision.

Apple’s difficulty demonstrating “real evidence of actual confusion” among consumers is a “stumbling block for Apple,” Hamilton said in court. “I’m troubled by the showing that you’ve made so far, but that’s where you’re likely not to prevail at this early juncture.”

In March Apple sued Amazon, saying the online retailer is using Apple’s “App Store” trademark for a mobile-software developer program. In a complaint filed March 18 in federal court in northern California, Apple accused Amazon.com of trademark infringement and unfair competition and asked for a judge’s order to prevent the company from using the “App Store” name, as well as for unspecified damages.

Apple registered for a trademark on the term App Store on July 17, 2008. It has been using the name since then to refer to its applications store for iOS devices. Earlier this year it also launched the Mac App Store.
“Amazon has begun improperly using Apple’s App Store mark in connection with Amazon’s mobile-software developer program,” Apple said in the complaint. Amazon also plans to use the name with a mobile-software download service, the complaint states.

In April Amazon responded in court to Apple’s trademark infringement lawsuit. Amazon’s response was filed in a U.S. District Court in the Northern District of California.

Apple wants to improve sound capture in its mobile devices 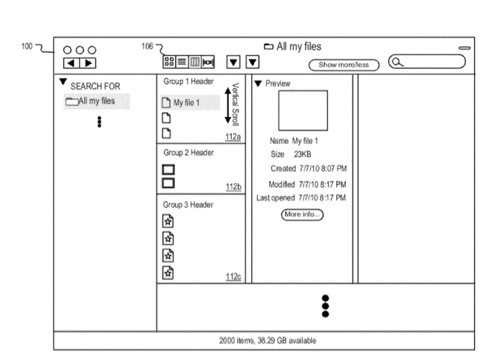 Apple patent is for info management with non-hierarchical views