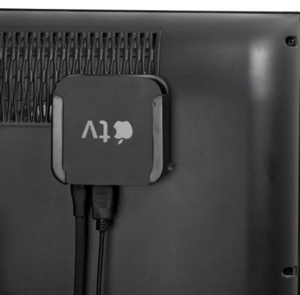 Innovelis (http://www.Innovelis.com) has released TotalMount, an US$29.99 mounting system that allows you to snap your Apple TV to the back of your wall-mounted television. It enables quick installation of Apple TV behind virtually any flat panel television, according to Wes Schwie, vice president of marketing, Innovelis.

“In many cases adding another media device to a wall mounted TV isn’t ideal since it can mean running a new cable to the TV and the additional media box can clutter the area,” he says. “The TotalMount system allows people to discreetly mount Apple TV behind wall-mounted televisions, which helps preserve a clean and uncluttered appearance of one’s walls.”

The patent-pending TotalMount system includes three ways to mount an Apple TV.  In the first mounting option, the Apple device slides into TotalMount, which then securely attaches to the vents behind the television using proprietary hooks.  Alternatively, TotalMount connects Apple TV to the wall mounting bracket that attaches the television to the wall.

These two options enable tool-free, nearly instantaneous mounting. The final mounting option uses screws to connect the Apple TV directly to the wall rather than snap the Apple TV to the back of the television.

“Apple’s remote can easily communicate with the Apple TV even when it is behind the television,” Wengreen says. “The infrared [IR] waves bounce off the ceiling and hit the Apple TV sensor behind the TV.”

Apple, Google among those vying for Kodak patents