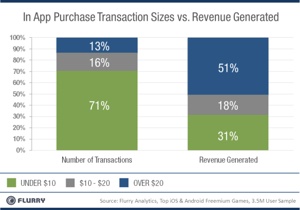 Digital distribution of games is disrupting the retail portable game category.  At the heart of this disruption is the proliferation of iOS and Android devices, which is doubling as a powerful portable gaming platform and challenging Nintendo DS and Sony PSP for gamer mindshare, according to the folks at Flurry (http://www.flurry.com), a mobile application analytics and recommendation-engine company.

Now if only my dream of having the ability to “upsize” iOS games for the Mac would come true.

All the while, Nintendo chief executive, Satoru Iwata, has remained outspoken, calling smartphone games worthless and warning the gaming industry of boring consumers.  In  contrast, Wedbush Morgan Securities veteran video game analyst, Michael Pachter, stated in April 2011 that “Nintendo will have to share the market with Apple and Android” because “the onslaught of $1 games is going to continue.”  By Flurry’s calculations, the onslaught is now coming in at a crushing $14 per transaction and from within the Trojan horse of freemium (a.k.a. free-to-play) games.

A new report builds on analysis released earlier this month, when Flurry revealed that games drive 75% of revenue generated among the top 100 grossing iOS apps, of which 65% were generated from freemium games. In the enclosed chart, we look at how 3.5 million consumers spent their money across top iOS and Android freemium games.

The left-hand column shows the distribution of transaction sizes within freemium games; in other words, how many times consumers spent anywhere from US$0.99 to sometimes over $100 per transaction. Each purchase equates to a virtual good or currency in the game a consumer is playing.

Let’s spend a moment on the $14 average, which may seem high at first.  There are two reasons the average settles here. First, within the “under $10” bucket, most transactions cluster at the $9.99 level, followed by $4.99, and finally $0.99.  In fact, in total, consumers spent $0.99 less than 2% of the time. Why then would so few consumers spend just $1 in freemium games when this price point is so popular among premium games (the pay-before-you-can-play model)?

Because freemium games drive a different decision-making mindset for consumers. They simply are deciding whether or not to spend.  Our data shows that around 3% of consumers will spend money in freemium games.  A deep commitment to the game experience appears to influence their buying habits.

The second reason the $14 average seems high is because the high-end of the spending spectrum is very high.  Among all purchase price points, over 5% of all purchases are for amounts greater than $50, which rivals the amount paid at retail for top console and computer games.

On the low end, we’re “packing sardines” — that is, accumulating a lot of small transactions.  While the under $10 bucket delivers about two-thirds of the transactions, it only accounts for about one third of the dollars. On the other end of the spectrum, at the “over $20” spend-level, we find the “whales.”

In fact, further breaking down the “over $20” category, 30% of the total revenue is generated from transaction sizes of over $50.  If you’re a game designer, your main take away is that very few transactions — and consumers who complete those transactions — make up the bulk of your revenue.  Therefore, your “meta-game” should be about whale hunting.

Now imagine mobile games — freemium and otherwise — taken to the next level with, as I’ve mentioned before, the GameDock system proposed by “Mac/Life” (though I’d put a twist on it): “The GameDock accommodates the iPhone and iPod touch and hooks directly to your TV and the Internet. Whether you download a game wirelessly via the handheld or wiredly via the GameDock, you pay just once for two versions of the same title.

Initial version of Light Peak may use copper