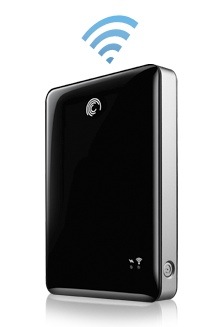 Want more storage for your iPad? I thought Seagate (http://www.seagate.com) had the answer with its GoFlex Satellite mobile wireless storage. I was wrong, and I generally love Seagate’s products.

The Satellite is a battery-powered, 500GB, US$199.99 external hard drive that wirelessly extends the storage capacity of any Wi-Fi enabled mobile device using 802.11 b/g/n and a rechargeable battery. With it you can stream to almost any Wi-Fi enabled device using a web browser or the free app that’s optimized for the iPad. At least that’s the theory.

Before you proceed further, note the main problem with the Satellite: I could never get the sound to play on videos with the GoFlex drive. This includes the sample files (tutorials, demos) that came on the drive, as well as my own videos and tunes I moved over. The video itself played just fine, but I could never hear audio despite what I tried.

That’s probably a deal killer right there. If not, continue on …

You can drag and drop files from your computer to your GoFlex Satellite device or use optional media synchronization software. Go to seagate.com/support/goflexsatellite to download the software. However, the syncing software is as slow as molasses in winter. Dragging and dropping is much quicker.

However, even that is pretty pokey since the GoFlex Satellite connects via USB 2.0. Seagate does offer a FireWire 800 interface as an option. If you’ll be using the GoFlex regularly with a Mac (it requires Mac OS X 10.5.8 or higher), it would be worth your moolah to invest in the FW800 interface; it’s US$24.99.

After you plug your GoFlex Satellite into your Mac for the first time, you need to let it charge, though it’s partially charged and ready to use right out of the box. When the Power LED is red, charge the drive using the included USB-to-DC cable and USB wall adapter or car charger. It will turn green when it’s fully charged.
After pressing the power button, the WiFi LED blinks blue within one minute, indicating your GoFlex Satellite device is ready to be accessed wirelessly.

To use it with the iPad, go to the Apple App Store and search for “goflex media.” Install the GoFlex Media app. On the iPad, choose Settings > Wi-Fi and then select GoFlex Satellite from the list of wireless networks. From the Home screen, tap the Network settings and choose GoFlex Satellite JMN.

For other tablets, smartphones and computers (the GoFlex Satellite should work with, say a MacBook Pro, but I haven’t tested that theory yet):

° Select GoFlex Satellite from your device’s list of wireless networks.

See the GoFlex Satellite User Guide online at seagate.com/support/goflexsatellite for complete instructions. Note that, of course, your iPad (or other device) will only play files in the format it supports.

Supposedly, after you’ve initially connected with the GoFlex Satellite, it will automatically be detected by your iPad and connect. I never found that to be the case and had to manually connect every time I used the device.

While you’re traveling or when you just don’t want to connect via USB (or don’t want to) you disconnect the GoFlex Satellite from your Mac (a small cover protects the back port when you don’t need a cable), connect to it via the built-in Wi-Fi hotspot, and browse the files using a web or iOS app interface. You can also download files from the drive and then turn it off to save battery life.

Seagate says the GoFlex Satellite offers up to five hours of battery life and up to 25 hours of standby time. I didn’t get that much when watching videos, but the device did run longer than four hours. Also, it works up to 100 feet.

One nice thing about the GoFlex Satellite is that multiple users can wirelessly access the device at once. They can watch different videos or listen to different audio.
 
Unfortunately, Seagate’s syncing software isn’t very reliable. Beside being sloooooow, some photos and videos were generically labeled. And the syncing software doesn’t recognize nested folders.

The GoFlex Satellite comes with a Paragon driver — a utility that enables Mac OS X to mount NTFS volumes (partitions), read from them, and write to them. In short, it makes the GoFlex drive usable on a Windows PC and on a Mac without any reformatting or data erasure or instability.

The GoFlex drive comes pre-formatted with a NTFS partition. If you have already reformatted the drive in Mac OS X and find that the .dmg file is unusable, make sure the drive is named “FreeAgent GoFlex Drive,” and that the Windows files are on the drive as well as the .dmg file.

Once you’ve done all this, there are still problems. I drag and dropped Pages documents onto the GoFlex Satellite, hoping for an easier way to use them on my iPad. They wouldn’t open.

Finally, The Seagate device is designed for portability, but doesn’t come with a carrying case.

I really wanted to like this device more. If I could carry all my tunes and videos on the GoFlex Satellite and access them on my iPad and MacBook Air it would be invaluable. As it is currently, however, it’s a great idea that falls incredibly short in its implementation. 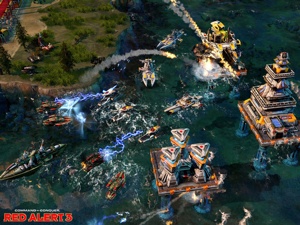 Red Alert 3 comes to the Macgamestore