Apple patent is for advanced keyboard with air-based feedback 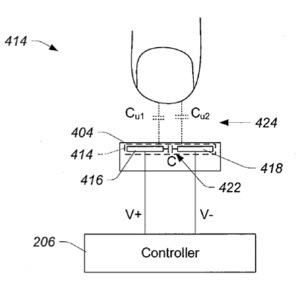 An Apple patent (number 20110107958) has appeared at the US Patent & Trademark Office for a keyboard with advanced sensors, an air-based feedback and tactile feedback features.

The patent describes input devices for processor-based systems, including computing systems, to provide enhanced user experience. The described systems provide tactile sensations providing feedback to a user. In some systems, feedback is provided before actual contact with the key expelling air from the input device proximate the key when user selection is imminent. In other examples, the tactile sensation results from automatic movement of the key in response to detected user selection of the key. The inventors are Aleksandar Pance, Michael Sinclair and Brett Bilbrey.

“Many computing devices and other processor-based systems, such as computers, mobile communication devices, and portable media players, have become smaller and thinner (lower-profile) relative to prior counterpart devices. As a result, input devices associated with those devices, such as keyboards and key pads, have also become correspondingly smaller and lower-profile. These input devices may be lower profile out of necessity, for example to function as a part of a relatively low profile assembly (such as, for example, a relatively thin laptop computer or similar device), or may be low profile primarily for esthetic reasons.

“In the cases of input devices such as keyboards and key pads, a relatively lower profile design dictates keys with relatively reduced travel relative to more conventionally sized devices. However, that reduced travel also changes, and typically limits, the tactile feedback experienced by a user. Thus, in many cases, such reduced travel input devices do not provide a fully satisfactory user experience for users accustomed to more conventional designs. In many cases, this less than fully satisfactory user experience includes less than satisfactory tactile feedback to the user, due to the limited travel of the keys.

“Embodiments of input devices for processor-based systems, including computing systems, are described, as well as methods of operation of the input devices to provide enhanced user experience. Although applicable to all key or actuator-based input devices, the examples described herein are believed to offer particular advantages for low profile input devices, and also particularly to keyboards, key pads, and similar devices. In some examples, the user experience will be impacted by a change in the tactile feedback relative to conventional devices.

“One example of changed tactile feedback as described herein includes providing feedback to a user before actual contact with the key. That may be done by detecting the proximity of a user to a key of the input device that suggests an imminent user actuation of the key, and in response to detected proximity, to flow air from the input device proximate the key in question (such as, for example, through openings in a key surface, or through openings adjacent the key assembly), to provide tactile feedback to the user before physical contact with the key surface. In some cases, the air pressure may be applied in a manner to oppose motion of the user toward the key surface.

“Other described embodiments include detecting user selection of a key and controlling movement of at least a contact surface of the selected key in response to the user selection. In one example, a pneumatic system will be used to advance the selected key in a direction of actuation in response to detecting user selection. The key is thus pneumatically pulled away from the user. In some examples, both of these described systems may be used in combination, providing initial air resistance to movement, and then withdrawing the key from the user’s touch.”