The Senate Judiciary Subcommittee on Privacy, Technology and the Law announced May 6 that Guy L. “Bud” Tribble, vice president of software technology at Apple, will represent Cupertino at a May 10 hearing titled “Protecting Mobile Privacy: Your Smartphones, Tablets, Cell Phones and Your Privacy.”

At issue is the location-based data collected by smartphones. Last month, researchers said that iOS 4 location information was stored in an insecure manner and accessible to anyone who stumbled upon your iPhone, iPad, or the computer with which you synced your iOS device. That prompted concerns that Apple, and anyone who looked at that data, could track your whereabouts.

Tribble has testified on behalf of Apple before. He appeared at a July 2010 Senate Commerce Committee hearing about online privacy, during which he was also questioned about location services, notes “PC Mag” (http://www.pcmag.com/article2/0,2817,2385038,00.asp). Google has also been asked to testify about the location services provided by its Android operating system. Alan Davidson, director of public policy for the Americas at Google, will be in attendance at the Senate hearing.

Tribble joined Apple in 2002 from Eazel, where he was vice president of Engineering, leading development of next generation user interface software and Internet services for Linux computers. Previously, Tribble was chief technology officer for the Sun-Netscape Alliance, responsible for guiding Internet and e-commerce software R&D. Tribble also helped found NeXT Computer, where he was vice president of Software Engineering and a key architect of the NextStep operating system. 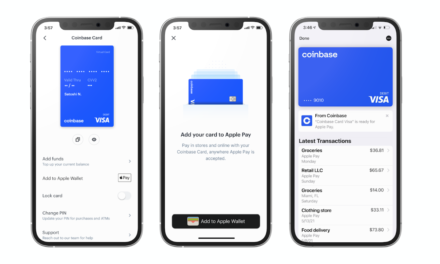 You can now use your Coinbase Card with Apple Pay