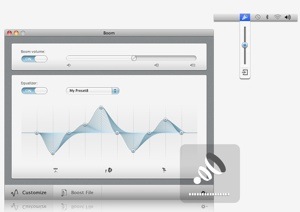 If you’ve ever found yourself dealing with low audio output on a Mac (more common on laptops with their small speakers than desktops such as the iMac), Global Delight’s Boom will boost the audio volume. Significantly, as in up to 400%.

Once installed, a Boom icon appears in the Mac OS X menu bar. You can use it to adjust the volume via a slider and tweak Boom’s settings (more on that in a moment).

For better or worse, Boom boosts the audio output of the entire system rather than focusing on a few applications. This means you can now enhance the volume of media-playing applications like iTunes and QuickTime. You can also boost the volume of online videos like YouTube and Hulu playing on a web browser.

Voice applications like iChat and Skype can also use Boom to enhance their audio experience. On the other hand, if you want an app that lets you personalize volume settings for different apps, you’ll need to look elsewhere.

Boom doesn’t just make your Mac’s audio louder however; it provides a simplified equalizer with custom presets to further tweak the audio experience at the system level. Presets include Flat, Bass Boost, Treble Boost, Soft, Loud, Music, Vocals and Movies. Fiddle with the settings, and you’ll certainly notice a difference. Personally, I found the Loud setting did little except distort the audio slightly, so I’d skip it.

Even iPad/iPod/iPhone users will find Boom useful. The app provides the ability to also boost the audio files residing in the iTunes library or from the disk. It then transfers the boosted files to your iOS device through iTunes.

Boom isn’t a greedy app. When it’s idle (you make the volume boost/presets off), the app doesn’t consume any CPU/memory.

There’s a weird feature called Shriek. With it, you can test the power of you voice with the loudest shriek getting the better score and being awarded a title. Users can compete and challenge friends on Facebook using this app and compare scores both locally and globally. If this is your cup of tea, have at it. Having a screaming contest, however, isn’t how I want to spend my spare time.

Boom will certainly amp up and improve the audio of your Mac’s speakers. It made a major difference in the sound output of my wife’s MacBook Pro and a substantial improvement on my 27-inch iMac. The software won’t replace a dedicated set of speakers — and, in fact, doesn’t work with external speakers, only those built into your Mac. But if you don’t have standalone speakers for your Mac, Boom is a fine investment.

Boom runs on Mac OS X 10.5.8 or later on any Intel or PowerPC-based Mac. A single user license is US$8.99, though version 1.1 is a free update for registered users. A demo is available for download at the Global Delight web site (http://www.globaldelight.com/boom). 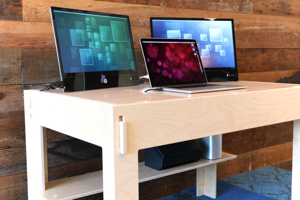