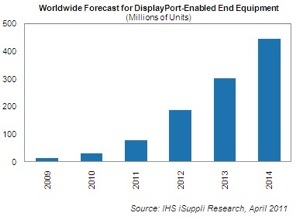 Fueled by Apple’s adoption, the DisplayPort digital display interface standard is gaining rapid momentum in 2011, with shipments in computer-related equipment expected to rise by a triple-digit percentage this year, according to new IHS iSuppli (http://www.isuppli.com) research. Global factory shipments of DisplayPort-enabled computer equipment will amount to 78.9 million units in 2011, up 154.6% from 31 million units in 2010.

The year will represent a peak period of DisplayPort growth. Growth in 2011 will exceed the 2010 expansion of 136.5% and also outpace next year’s anticipated 137% increase. While growth rates will taper off during the following years, annual shipments of DisplayPort-equipped devices will rise to 445.2 million units by 2014.

“Although DisplayPort had been around for several years, the technology achieved only sporadic usage until 2009, when Apple began to support the interface as a standard feature of its notebook and desktop designs,” says Randy Lawson, manager and principal analyst for display and consumer electronics at IHS. “This provided the essential momentum to drive DisplayPort beyond the nascent stage and into the mainstream. With the strong adoption of DisplayPort from system and chip vendors, and declining support for the existing video graphic adapter (VGA) standard, the new technology will experience rapid growth in the coming years.”

As the long-awaited replacement for the decades-old VGA interface, DisplayPort is being used in the computing equipment market for devices including mobile computers, desktopCs, graphics cards, flat-panel monitors and business projectors. DisplayPort derivatives such as internal DisplayPort (iDP) and embedded DisplayPort (eDP) also are designed to provide a simpler, lower-cost serial interface alternative to the older, bulkier solutions based on low-voltage differential signaling (LVDS), a system for transporting video and graphics data from PC and TV motherboards to the integrated LCD panels.

Prior to the adoption by Apple, only occasional sightings of DisplayPort had been made in the market. Early supporters included Dell and HP, which offered a smattering of DisplayPort equipped notebook and desktop PCs. Furthermore, Lenovo Group added DisplayPort into a few product lines for the ThinkPad docking station.

Since then, DisplayPort has made additional headway. In particular, all three major vendors of computer microprocessors and graphics processing units — Intel, AMD and nVidia — have moved to integrate DisplayPort into their current product lines, with the companies signaling a five-year horizon to finally end support for VGA.

The DisplayPort interface will find its widest application this year in mobile computers. About 41.8 million notebooks will ship with the interface in 2011, compared to 14.7 million last year. The penetration will exceed 72% by 2014, with processor designs and slim form factors forcing a rapid transition away from VGA, IHS iSuppli figures show.

The second-largest application of DisplayPort will be in graphics cards, shipping with 14.7 million units this year, up from approximately 7.0 million in 2010. Desktop computers are third, with DisplayPort-enabled shipments this year of 12.3 million.

Combined shipments of DisplayPort-enabled computers will jump from 20.1 million units in 2010 to 54.1 million this year, on their way to a projected 341.2 million units by 2014. An inflection point will occur from 2013 onward as DisplayPort deepens penetration in computers very quickly and as VGA is phased out of motherboard designs, IHS predicts. And by 2016, the adoption rate of DisplayPort for desktop and mobile computers likely will be more than 9% –and conceivably could hit a full 100%.

In contrast to the widespread adoption of DisplayPort in the computer sector, its penetration will be much slower into the monitor segment, which typically has longer product refresh cycles than desktop and mobile computers. Also, a number of obstacles will serve to delay monitor adoption, including thinner profit margins as well as legacy support requirements for video and graphics source devices. VGA, though declining in volume, will remain a common interface on monitors for some time to come, IHS iSuppli research indicates.

Top Gun gunning on the Mac later this year

Kool Tools: HiRise for the Mac 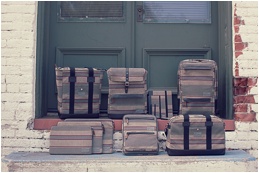