Nielsen: Apple has 27% of smartphone market 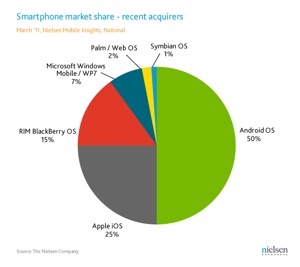 According to The Nielsen Company’s (http://www.nielsen.com) monthly surveys of U.S. mobile consumers from July-September 2010, consumers planning on getting a new smartphone had a very clear preference: a third (33%) wanted an Apple iPhone. Slightly more than a quarter (26%) said they desired a device with the Google Android operating system (OS). And 13% said they wanted a RIM Blackberry.

But consumer preferences can be fickle. Those same surveys for January 2011- March 2011 show just how much things have changed. According to the latest figures, 31% of consumers who plan to get a new smartphone indicated Android was now their preferred OS. Apple’s iOS has slipped slightly in popularity to 30% and RIM Blackberry is down to 11%. Almost 20% of consumers are unsure of what to choose next.

Those dynamics are already translating into sales. Half of those surveyed in March 2011 who indicated they had purchased a smartphone in the past six months said they had chosen an Android device. A quarter of recent acquirers said they bought an iPhone and 15 percent said they had picked a Blackberry phone.

Which brings us to the installed base of smartphone consumers: As of March 2011, 37% of mobile consumers who owned a smartphone had a device with an Android OS. Apple’s iOS, claimed by 27% of consumers, is now outpacing Blackberry, which has 22% of the market.