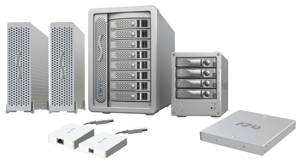 Sonnet Technologies has announced its first products with Thunderbolt technology at the 2011 NAB Show. Developed by Intel and brought to market with technical collaboration from Apple, Thunderbolt technology supports high-performance data services and high-resolution displays through a single, compact port. Thunderbolt appears on the latest MacBook Pros and is expected to expand to the entire Mac line.

Based on PCI Express and DisplayPort technologies, Thunderbolt provides support for two channels on the same connector with 10 Gbps of throughput per channel in both directions.

Sonnet’s Echo Express PCIe 2.0 Expansion Chassis with Thunderbolt Ports enables users to plug in PCI Express 2.0 adapter cards to any computer with a Thunderbolt port. Adapters such as professional video capture cards, 8Gb Fibre Channel cards, 10Gigabit Ethernet cards, and RAID controller cards are examples of the adapters that may be used.