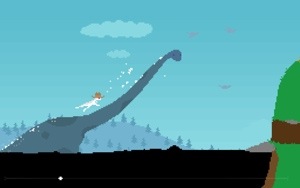 Here’s how Dino Run SE is described: “Players are invited to enter an immersive prehistoric world of pixels where they must race their dinosaurs to escape the inevitable pyroclastic doom wave of extinction. This single/multiplayer game includes an abundance of new features with its release, including new game modes, new levels, and enhanced gameplay.

“Collect bones, eggs and other hidden items to unlock special features and collectibles to enhance and personalize your dino, including a huge assortment of colors and wearable hats, helmets and masks. Like the original Dino Run, players can choose to race their dinosaurs on their own in the deep single player campaign, or play online with up to three other people in a variety of new multiplayer levels.”