Global Delight has updated Boom, a volume booster application for the Mac, to version 1.1. The update offers improvements with video boosting, channel balance, reduced CPU utilization by more than 50%. More importantly when it is idle (you make the volume boost/presets off), the app does not consume any CPU/memory.

Global Delight has also added a fun element to the app, called Shriek. With Shriek, users can test the power of their voice with the loudest shriek getting the better score and being awarded a title. Users can compete and challenge friends on Facebook using this app and compare scores both locally and globally.

Users are often confronted with the issue of low audio output on their Mac (both desktop and laptops). Sometimes the content itself comes with poor audio quality, as is the case with online videos. At other times, being outdoors doesn’t help. The experience could be frustrating too like in the case of bad volume during voice chats in spite of maxing the volume of your Mac.

Boom is designed to make life easier by boosting the audio output of the entire system rather than focusing on a few applications. This means you can now enhance the volume of media-playing applications like iTunes and QuickTime. You can also boost the volume of online videos like YouTube and Hulu playing on a web browser. Voice applications like iChat and Skype can also use Boom to enhance their audio experience. Additionally, Boom provides a simplified equalizer with custom presets to further tweak the audio experience at the system level.

iPod/iPhone users have always wanted their music to play louder on their device speakers. According to the folks at Global Delight, Boom helps here by having the ability to also boost the audio files residing in the iTunes library or from the disk. It then transfers the boosted files to your iPod/iPhone through iTunes.

Boom runs on Mac OS X 10.5.8 or later on any Intel or PowerPC-based Mac. A single user license is US$8.99, though version 1.1 is a free update for registered users. A demo is available for download at the Global Delight web site (http://www.globaldelight.com/boom). 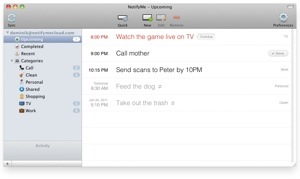 Deals: QuickVoice X 40% off today only